Visit the Castle of Saint George in Lisbon 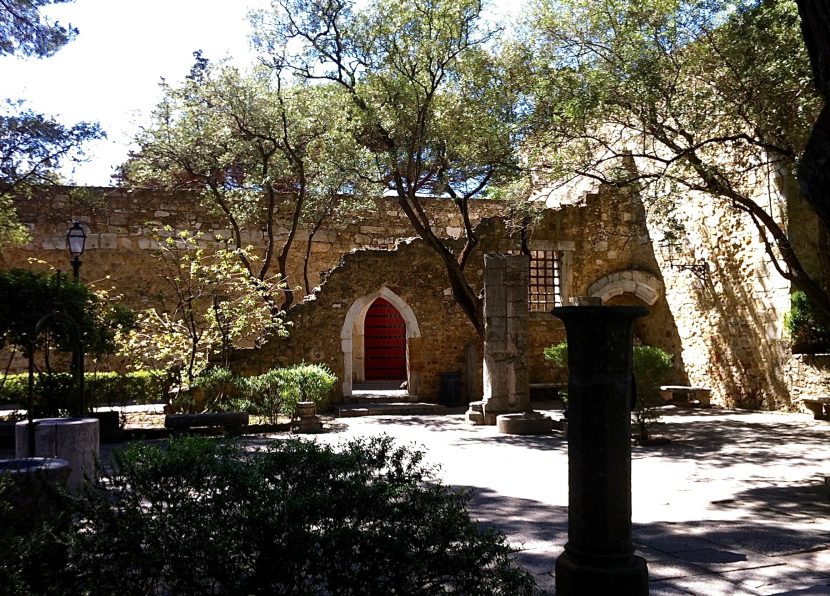 Book below your visit to Sao Jorge Castle in Lisbon. All the tours offered have excellent comments, are made by a guide who speaks your language and can be booked or cancelled quickly with a few clicks.

Introduction to the Sao Jorge castle

There is a certain charm in the São Jorge castle which is still hidden and mysterious. The view from the castle walls is really magnificent, from the hill you can see Lisbon from almost all sides, look into the small courtyards under the castle walls, touch very old stones. Despite all the tourist promotion of the castle, at the top of the hill you can feel an incomparable peace and tranquility. Find below various information about the fortress, so that you can decide for yourself if you want to visit the São Jorge Castle of Lisbon.

Castelo de São Jorge (São Jorge Castle) is a sacred place for the Portuguese. It was with the conquest of the Moorish fortress, located on a high hill at the mouth of the Tagus river, that Don Alfonso Henriques, on 25 October 1147, created « Portugal » and the city of Lisbon. Don Alfonso Henriques was the first king and founder of the dynasty. The oldest Portuguese legends are associated with this place. However, many tourists do not consider the castle a must-see visit to Lisbon, saying that it is simply another great view of Lisbon and that it is a paid observation point, unlike many others.

What to do at Sao Jorge Castle

All you have to do is walk around the castle and enjoy the view from its ramparts. Lunch at one of the stone tables can be a great idea. There is only one restaurant nearby, prices are a little high due to the popularity of the place but nothing prevents you from bringing sandwiches and eating them on site during your visit.

I strongly recommend visiting the dark room. The room of the obscura is located in the treasure or archive tower. As a result, all royal treasures (tax revenues and royal rents) and government securities were kept at Torre do Tombo. The Portuguese national archives still bear the name of Torre do Tombo, which literally means Tower of Archives.

As I said, the visit to the dark room is organized in Portuguese and English: if you are accompanied by a guide, it will be a pleasure to make all the explanations in your language during the visit. The attraction is that an intelligent and purely mechanical device of lenses and mirrors that project an image of Lisbon onto a concave mirror. A member of the team shows and talks about the different monuments and buildings in Lisbon. Using a lever, the guide moves the image around the mirror and you have a beautiful view of the whole city in 20 minutes. As the process takes place in real time, the dark room can be closed in bad weather.

Of course, you can climb all the walls of the fortress and take many pictures. The main treasures of the Moorish quarter are hidden under a reinforced concrete chest, so you won’t be able to see anything for yourself. The brochure promises to show 2 buildings with a total area of 160 and 190 square metres, decorated with Moorish geometric motifs. An important point of the visit of the Sao Jorge Castle since these buildings date back to the XI-XII centuries, i.e. before the Portuguese period. The charm of the castle is also made by the peacocks walking freely and fed in the castle.

The Sao Jorge Castle is a very old and important place for the Portuguese. You can see ancient artifacts and relics from antiquity. The walk around the castle is absolutely wonderful and the price of your ticket will be well amortized.

How to get to the Sao Jorge Castle

The Sao Jorge Castle is easily visible from anywhere in Lisbon, on a high hill above the city. You can walk to the castle from the commercial square and on the way you can see Lisbon Cathedral, admire the views of the city from the Santa Luzia observation bridge, look at the magnificent azulejo which decorates its magnificent panels, if you want to go down to Alfama and walk in the older part of the city, which has preserved the medieval buildings. If you do not want to walk, you can go to the entrance of the castle by bus 37 or by tram 28 and 12.

Tickets for the Sao Jorge Castle

A ticket to the castle costs €8.5, free for children under 10 years old. The castle is open every day from 9am to 9pm, the entrance is closed 30 minutes before 9pm. During the high tourist season, there may be queues for tickets. Next to the ticket office, you can take a brochure with explanations in several languages.

The ticket price includes a visit to the room of the obscura and the archaeological area with a guide. These events are held in Portuguese and English, so ask when to plan your next English session at the entrance. The official website of the Sao Jorge Castle does not indicate the time of the sessions.

History of the Sao Jorges Castle

Of course, as archaeological excavations have confirmed, people lived on a high hill above the Tagus from the 7th to the 8th century BC, long before the appearance of the first states, cities and borders. Written evidence has been preserved that the defensive walls were at the top of the hill during the time of the ancient Romans.

I have already mentioned Don Alfonso Henriques (Henriques means Henry’s son) who defeated his ally the King of Castile, which allowed him to gain the independence of his county and devote several years of his life to wars against the Moors. Needless to say, without this legendary hero, the capture of the last Moorish stronghold would not have been possible. It is said that the Crusaders managed to break into the fortress, thanks to the sacrifice of the knight Martim Moniz. The hero found a secret gate to the fortress, and with a small group of knights entered a battle with the Moors. The Moniz door contains a commemorative plaque dedicated to him. The name of the legendary knight Martim Moniz has a prominent place in the city centre of Lisbon. In other words, the hero always enjoys the respect of the politicians and inhabitants of Lisbon.

From the moment the castle of Saint-Georges was taken, the golden age arrived for the Portuguese capital. All Portuguese kings kept their official residences in the castle for four centuries, from the 13th to the 16th century.

Of course, many things were built and demolished during this period. The king’s palaces are practically empty. Now, in the building that belonged to the royal residence opened a fairly expensive restaurant but the interior is extremely simple and modern. Only the Gothic brick vaults of the old days survived. <And with such views from the observation point even the most chic atmosphere of the restaurant is not able to surpass the view of Lisbon from the castle walls.

At the end of the 16th century, the royal court left the Sao Jorge Castle, at the time of the great geographical discoveries, money was flowing into Portugal. The king felt so confident in his country that he no longer felt the need to protect his residence with the thick walls of the castle.

On the territory of the castle, barracks were erected and the castle had long belonged to the army. The 1755 earthquake caused extensive damage to the walls of the fortress.

It was only at the beginning of the 20th century that the Sao Jorge Castle received the honorary title of national monument and Portugal began restoration work. It is difficult to say exactly how many years these walls are exactly. The restoration also included the demolition of the barracks and subsequent buildings.

The Lusitano city is attracting more and more visitors and even if I generally direct my recommendations to those who want to stay there, I wanted to present here some additional information for those who want to visit it. I unfortunately notice many holidaymakers disappointed by their stay and this content will defend a little bit those who come to see me read: their visit to the Sao Jorge Castle in Lisbon is very likely to be great. You will be able to consult an unimaginable number of guided tours in Lisbon, but in my articles I have chosen to make you a choice of those that will most satisfy summer visitors who wish to pass through Lisbon. The selected visits usually have very good reviews, are carried out by French-speaking specialist guides and those who came before you have been satisfied.