Visit the Pena Palace in Sintra 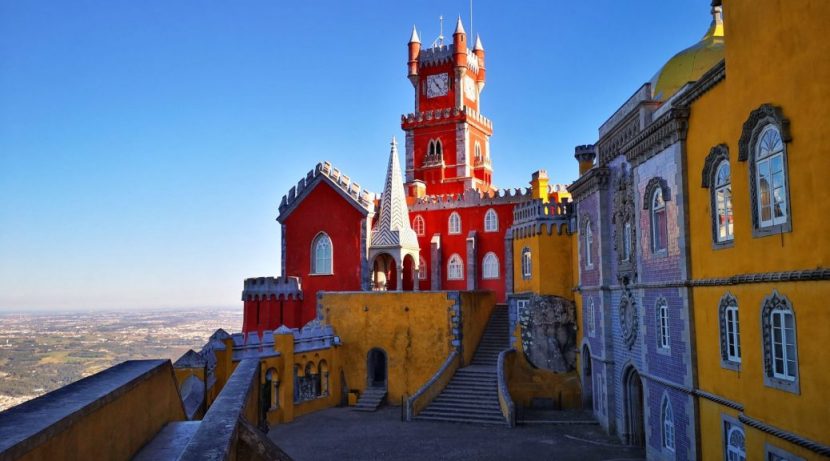 Book your visit below for the Pena Palace in the Lisbon region. All the tours offered have excellent comments, are made by a guide who speaks your language and can be booked or cancelled quickly with a few clicks.

Introduction to the Pena Palace

Pena Palace is located in the charming suburbs of Lisbon – Sintra. The fairytale castle stands on the top of a high hill in the Sintra mountain range, not far from the city of the same name. On a clear day, the Pena Palace is easily visible even from Lisbon and most of the large city. The Pena Palace is a UNESCO World Heritage Site, a national monument of Portugal and one of the country’s seven wonders, along with Guimarães Castle, Obidos Castle, Batalha Monastery, Alcobaça Monastery, Jerónimos Monastery and Belem Tower.

The Pena Palace is also used for official state demonstrations. And Pena’s most important palace is simply magnificent, absolutely fabulous and unusual. This is something to visit absolutely in Sintra.

Go to the Pena Palace in Lisbon

First from Lisbon, you will have to go to Rossio station, then take the train to Sintra, 40 minutes away. The price of the train journey is €2.90 and you can pay for the journey with a card or buy tickets at the station’s ATMs. From Sintra station, you can take bus number 434 or drive to the entrance of the Pena Palace to visit it: the journey takes 5-10 minutes. The cost of the bus ticket is €4 one-way or €6.90 round trip, this bus cannot be paid by card and the ticket must be purchased directly from the driver.

In principle, it is possible to walk up the mountain but it is only for people who are sporty and physically very strong. The mountain is quite high – the summit of Cruz Alta in the Sintra mountain range is 528 metres above sea level.

Ticket schedules and prices depend on the season. Until October 27, prices are higher, followed by a slight decrease. You can only buy tickets for the park of Pena Castle or buy tickets for Pena Palace + Park. You can’t just visit the Pena Palace.

The Pena Palace itself is not located at the very entrance to the park. You can walk to the palace from the entrance or take another bus for 3€. Most people will be able to walk this way easily.

The inside of the palace is very interesting. The Gothic vaults give a certain gloom to the rooms. The windows and rooms are quite small with little light, but the views behind the windows are absolutely magnificent. You can see the Moorish castle, standing on another summit.

First, visitors enter the former courtyard of the monastery – a clubhouse. The royal family’s dining room occupies the same space as the monastery’s dining room. The most obvious change in the 19th century was the wall tiling of the Roisir factory. On the corner shelves is part of the ceramic collection created by King Ferdinand II, the dishes are arranged according to historical photographs, i. e. as they were under King Ferdinand.

The large hall of the Pena Palace is the brightest and largest room in the palace. At first, it was supposed to be the official reception hall, but later the king transformed it into a billiard room with elegant sofas and armchairs. The palace’s main hall was restored in 2014.

The park of the Pena Palace is simply huge, its surface area is more than 200 hectares. The whole park is located on a rugged terrain, in which you can find many pleasant corners, architectural elements and the number of rare and very important foreign plants. It’s like a botanical garden. Tickets are accompanied by a map of the park so you don’t miss anything.

Architecture of the Pena Palace

The architecture of the Pena Palace is a mixture of several styles, which is typical of 19th century Romanticism. In the details of the Palazzo della Pena, you can see elements of Gothic, Moorish and even Renaissance style. There are also many references to the famous Lisbon buildings in the architecture. For example, the entrance gate clearly shows the motifs of a pointed house (Casa dos Bicos), and the turrets on the edges recall the tower of Belém. The entrance portal is a cross between the triumphal arch and the medieval fortified gates leading to the castle.

The famous Triton – a strange setting, it turns out to be a symbol of the creation of the world of the four elements: sky and earth, fire and water. Instead of legs, he has fish tails and his hands gradually turn into vines.

History of the Pena Palace

The history of the Pena Palace dates back to the 12th century, when a small chapel in honour of the Virgin Mary was built on the top of the hill. According to legend, it is here that the miraculous phenomenon of the Virgin Mary took place.

In 1501, King Manuel I decided to build a monastery in honour of the Virgin Mary of Pena on the site of the chapel. The construction of the monastery takes place almost at the same time as the construction of the famous Jerónimos monastery in the Belém region of Lisbon. But the monastery of Pena had a much smaller budget. The monastery has never had more than eighteen monks. It was a very isolated place, far from the hustle and bustle of the world. Only occasionally did the sovereign monarchs of Portugal honour him with their visit.

In the 18th century, the monastery was struck by lightning and all its wooden parts were burned. And in 1755, the great Lisbon earthquake turned it into ruins. Only a small chapel, supposedly built according to Nicolas Cantherini’s project, remained almost intact after the earthquake. Nicolas Cantherini also worked on the construction of the Jerónimos monastery in Belém.

The ruins of the old monastery have long been forgotten, all forces have been concentrated on restoring the capital and no one cared about the small monastery on the top of the mountain. It was only in 1838 that the young King Ferdinand II (Fernando II) became interested in this wonderful place.
Born in Germany, Fernando was the prince of the house of Saxe-Coburg and Gotha-Kohari, and his childhood was spent in the courts of Austria and Bavaria. Later, he married the Queen of Portugal Maria II, had his first child and received the title of king and founder of the new dynasty. Therefore, it was already close to the style of romantic architecture, very strong in Bavaria.

Ferdinand bought the land of the former monastery, several surrounding estates and the ruins of the Moorish castle in the district. He then decided to rebuild the ruins of the monastery into a palace that would serve as a summer residence for the Portuguese royal family. The restoration of the building was entrusted to Lieutenant General Wilhelm Ludwig von Eschwege, a mining engineer.

Eschwege, a German amateur architect, has travelled extensively and probably visited several castles in the Rhine Valley. The construction continued between 1842 and 1854 and was almost completed in 1847: King Ferdinand and Queen Mary II participated in the decoration of the Pena Palace. Among other things, the king proposed vaulted arches, medieval and Islamic elements and designed a richly decorated window for the main façade (inspired by the window of the Order of Christ’s monastery in Tomar).

In 1853, Queen Mary died suddenly, trying to give birth to her eleventh child. Ferdinand became regent before his son, the future king Pedro V, reached the age of majority.

After Ferdinand’s death, the palace was taken over by his second wife. The Countess had been an opera singer and her relationship with the king was very mysterious. She was forced to sell the palace to King Luis. In 1889, the Pena Palace was purchased by the Portuguese State and after the Republican Revolution of 1910, it was recognized as a national monument and transformed into a museum.

The last queen of Portugal, Queen Amelia, spent her last night in the palace before leaving Portugal forever. The palace quickly attracted visitors and became one of the most visited monuments in Portugal. Over time, the colours of the red and yellow facades disappeared and became completely grey. At the end of the 20th century, the palace was repainted and the original colours restored.

In 1995, the palace and the rest of the cultural landscape of Sintra were declared a UNESCO World Heritage Site.