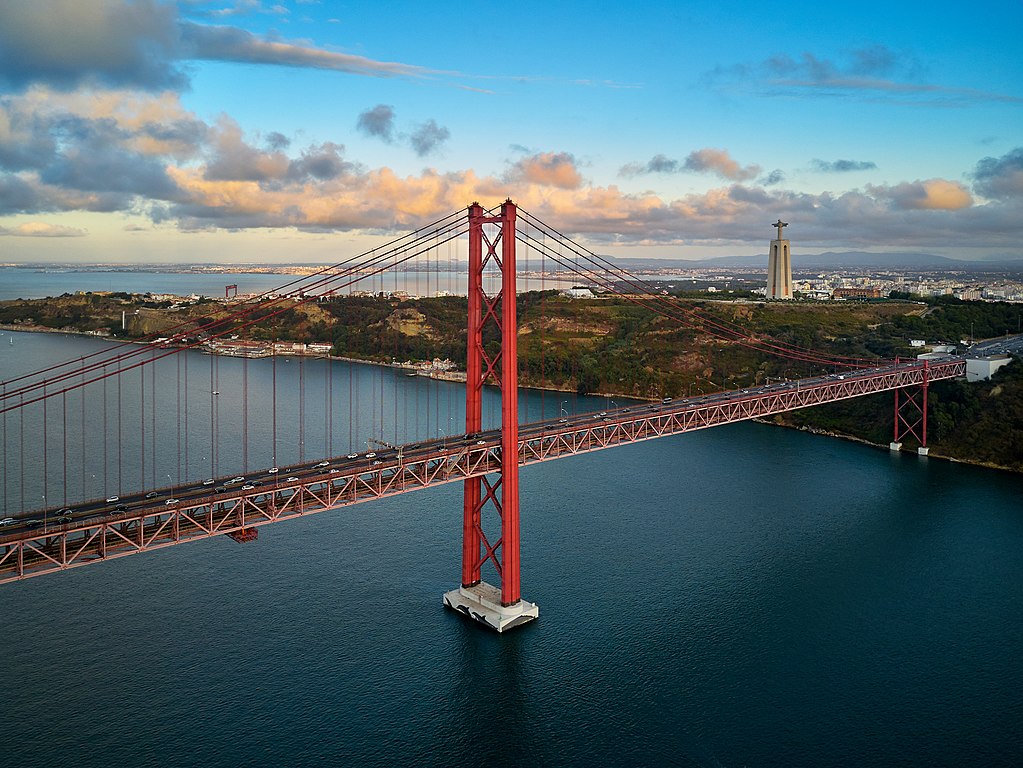 The 25 April bridge is a suspension bridge that connects Lisbon to the municipality of Almada, located on the left bank of the Tagus River. The bridge was inaugurated on August 6, 1966 and in 1999, the first train crossed the bridge.

The April 25 bridge in Lisbon, Portugal is very often compared to the Golden Gate Bridge in San Francisco (USA) because they have similar structures and colours (rope suspension bridge). It is interesting to note that this Lisbon bridge was built by the same company that built the San Francisco-Oakland Bridge (Bay Bridge), which also explains their similar design.

The total length of the bridge is 2277 m and it is one of the twenty longest suspension bridges in the world. On the upper platform of the bridge, there is a highway with 6 rows of traffic, underneath there are railways.

The idea of building the bridge was proposed by Portuguese engineer and contractor Antonio Belo in 1929. A commission was set up and it was decided to build a road and a railway bridge in Lisbon. But the project was postponed due to a river bridge in Vila Franca de Shira, 35 km north of Lisbon.

In 1958, the question of building a bridge was raised again and finally, in 1962, the construction of the Lisbon 25 April bridge began. The President of Portugal, Admiral Americo Tomaz and the Patriarch of Lisbon, Cardinal Manuel Gonzalves Cherejeira, attended the inauguration of the bridge. The bridge was named in honour of Prime Minister Antonio de Oliveira Salazar, who also attended its inauguration.

In 1974, after the Red Carnation Revolution in Portugal, the bridge was renamed the April 25 bridge, the day the revolution began.