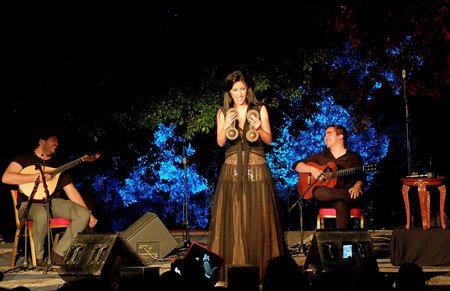 The musical genre of fado is as characteristic of Portugal as the waltz of Austria or the flamenco of Spain. A particular fado melody is recognizable from the first bars. It combines Moorish, African and Brazilian airs. The Portuguese name fado probably comes from the Latin Fatum: destiny. Fado singers often use the concept of saudade in their songs. A difficult word to translate to describe loneliness, melancholy, meaningless desire and anticipation of a sad future. As one of the songs says: « It exists, it’s sad, it’s fado ». Fado can be sung both at work and during entertainment hours. Fado shows are often performed in cafés and restaurants, then visitors forget their dishes, giving themselves fully to the feeling of a saudade.

One of Portugal’s attractions are the many houses in Fado, where it is customary to relax while listening to Fado’s shows. The soloist plays fado with one or more guitars (Portuguese or slightly modified classics), violins, accordion and sometimes piano.

A brief history of fado

Portuguese guitars are made from citrus fruits, they have 12 metallic strings, their fractional sound resembles that of a mandolin. There are two subspecies of fado in Portugal: Lisbon and Coimbra, and guitars have different shapes: Lisbon, in apple or heart form and Coimbra, in pear form with a deeper sound. In Portugal guitarra means Portuguese guitar, and the classical guitar is called alto.

The height of Fado was at the beginning of the 20th century, when Amália Rodrigues began to perform under the reign of Salazar. On the day of his death in 1998, a national mourning was declared in Portugal. She became the first woman whose ashes were placed in the pantheon of glory – the Church of Santa-Engrasia. Now, the heiress of the great Amalia is the singer Misia, who presents the Fado as a ritual of exorcism of inner pain.

Below, you can watch Misia’s video clip to get an idea of the fado music genre. There are not many videos of Amalia Rodriguez left, everything is in black and white. But the songs she plays are just as easy to listen to on YouTube. Misia’s CDs are published in Japan, South Korea, Spain, France and sold in nearly 70 countries around the world.

Visiting Lisbon without listening to fado is unforgivable!

If you are going to eat in a restaurant with a fado in Lisbon, you need to understand some things to avoid disappointment. Prices in restaurants where there is fado are generally 2 to 3 times more expensive than in other restaurants. Artists must be paid.

In some restaurants with Fado, the invoice includes a separate line for the show: the amount varies from 15 to 25 euros per person in addition to the price of the meal.

Fado houses usually open their doors after 7 or 8pm, the fado show doesn’t start right away, it can start an hour or two after the opening. In most restaurants, Fado singers perform for 20 to 30 minutes. When the artists start singing the light of the room will be dimmed.

It is strongly recommended to book tables in advance or a visit to Lisbon with Fado to ensure that everything is perfectly organized. During the months of July and August, all the houses in Fado are full. You can book either on the restaurant’s official website or during a personal visit if you are staying near a Fado house. You can also ask to book a table at the reception of your hotel and ask questions about the price when you book.

Many establishments have a standard tourist menu that includes a fado show and a list of dishes. On average, the menu costs 50€.

Below, I will give a list of restaurants where you can listen to Fado. This list was published in a Lisbon tourist brochure in 2017. Of course, there are other Fado houses in Lisbon than those listed. The most popular fado restaurants are concentrated in two districts: Alfame and Bairro Alto.

Adega Machado is the oldest house in Fado, founded in 1937 and located in Bairro Alto. It is 10 minutes from the Santa Justa elevator. Tables must be booked in advance. Up to 6 standard dinners between 44 and 49 €, without drinks. The first concert starts at 5pm and the evening concerts between 7pm and 11pm.

A Severa Fado, founded in 1955, is located in the Bairro Alto district. This Fado house is named after the famous 19th century fado singer Maria Severa. There is Fado every day of the week except Wednesday. The concert starts at 9pm and lasts two hours. The restaurant opens at 8:00 p. m. The price of the meal is between 49€ and 100€ per person. Visitors love this place, concerts and artists.

Luso Café, like the other houses in Fado, is located in the Bairro Alto area, near the Miradouro de São Pedro de Alcântara. The Fado concert starts at 7pm and lasts until 11.30pm with a 30 minutes break. The restaurant is located in the palace of Brito Freire, former director of the Portuguese colonies. The café opened its doors in 1927 on Avenida da Liberdade and then moved to Bairro Alto.

O Forcado is a Fado house located in the Bairro Alto region. The restaurant opened in 1967 and its godmother was the legendary singer Amalia Rodriguez. This is where the Coimbra Fado is sung. The restaurant opens at 7:30 pm and the fado starts at 8:30 pm.

Restaurants with Fado in Lisbon: Alfama

The Fado Club is located in the oldest part of Lisbon, near Lisbon Cathedral. Mario Paszeku, famous fado performer, winner of many awards and best fado composer, performs in this restaurant. The restaurant opens at 8pm and the fado concert starts at 9.30pm.

Marques da se Fado is located in the Alfama district, in an 18th century house. This Fado restaurant is open every day of the week except Monday, from 8pm.

Fado Em Si is located in the most medieval part of Alfama. The Fado House is located in the Senhora Palace of Murça, built in the 18th century in the bourgeois style. The restaurant opens at 7:30 pm and the fado show starts at 8:30 pm.

Alfama Fado’s Parreirinha house is located in the Lisbon district of Alfama. The place is quite difficult to find in the small streets of Alfama but is located near the Fado Museum. This Fado house is open every day of the week except Monday, from 8pm to 1am.

Pastel do Fado is located near the Santa Luzia observation bridge. It is very easy to find it with tramway number 28. If you go to Lisbon, you will probably miss it.

The Fado Pateo de Alfama house is located in the palace of the Lady of Murcia, halfway between the cathedral and the castle of Saint George. Usually, the excursions around Alfama. Part of the old wall of the city of Lisbon is located within its walls. This restaurant with Fado in Lisbon is open from 7.30pm to 11.30pm.

Restaurants with Fado in Lisbon: other districts

Fado Sr. Vinho’s house is not located in the city centre. It is further than the Santa Catarina observation bridge and there is no metro nearby. The restaurant is open every day of the week except Sunday. The list of Fado artists and performers is posted on the website. The Fado restaurant opens at 8pm and closes at 2am. The fado show starts at 9:00 p. m.

Maria da Mouraria is located in the historic district of Moraria, next to Martim Moniz Square. There is on this square the metro station of the same name. This restaurant with Fado in Lisbon operates from Wednesday to Sunday. It opens at 7:30 pm and the Fado show starts at 9:30 pm.

Fado Timpanas’ house is located near the bridge of April 25. There is no metro nearby. Performances begin at 7:30 p.m. and continue every 30 minutes until 11:30 p.m.

Fado in Chiado is located in the Bairro Alto area. Performances take place every day except Sunday at 7pm. The duration of the concert is 50 minutes.

The fado concert for children in the Lisbon Oceanarium takes place every first and third Sunday of the month at 9am. The concert is for children over 4 years old. A ticket for one child and two accompanying adults costs €35. The visit of the aquarium is included in this price. Tickets must be purchased in advance.

The fado tasting takes place at the Tivoli Theatre on Avenida da Liberdade, near the metro station of the same name, in the centre of Lisbon. The event includes a visit to the Tivoli Theatre, a fado show and a glass of port. The visit lasts 1 hour in English only. That’s all I wanted to write about the discovery of fado in Lisbon. When the city was not yet flooded by crowds of tourists, the entrance to all the houses in Fado was free and you could listen to the good singers of Fado. Now the good Fado singers perform in expensive concert halls or restaurants

The Fado Museum in Lisbon has emerged relatively recently but has succeeded in becoming a cultural and musical centre that attracts researchers, the curious, tourists or lovers of this authentic Portuguese art. The permanent exhibition tells the story of Fado from the 19th century, when it appeared until today. In the museum you can see the evolution of the Portuguese guitar, listen to songs and get to know this musical genre. The museum also offers a collection of musical instruments, rare scores, costumes of performers from different periods and much more. You can also listen to rare recordings in the Lisbon Fado Museum where special rehearsal rooms have been created for musicians.

The museum is open from Tuesday to Sunday from 10am to 6pm (last admission: 5.30pm). It is closed on January 1st, May 1st and December 25th.